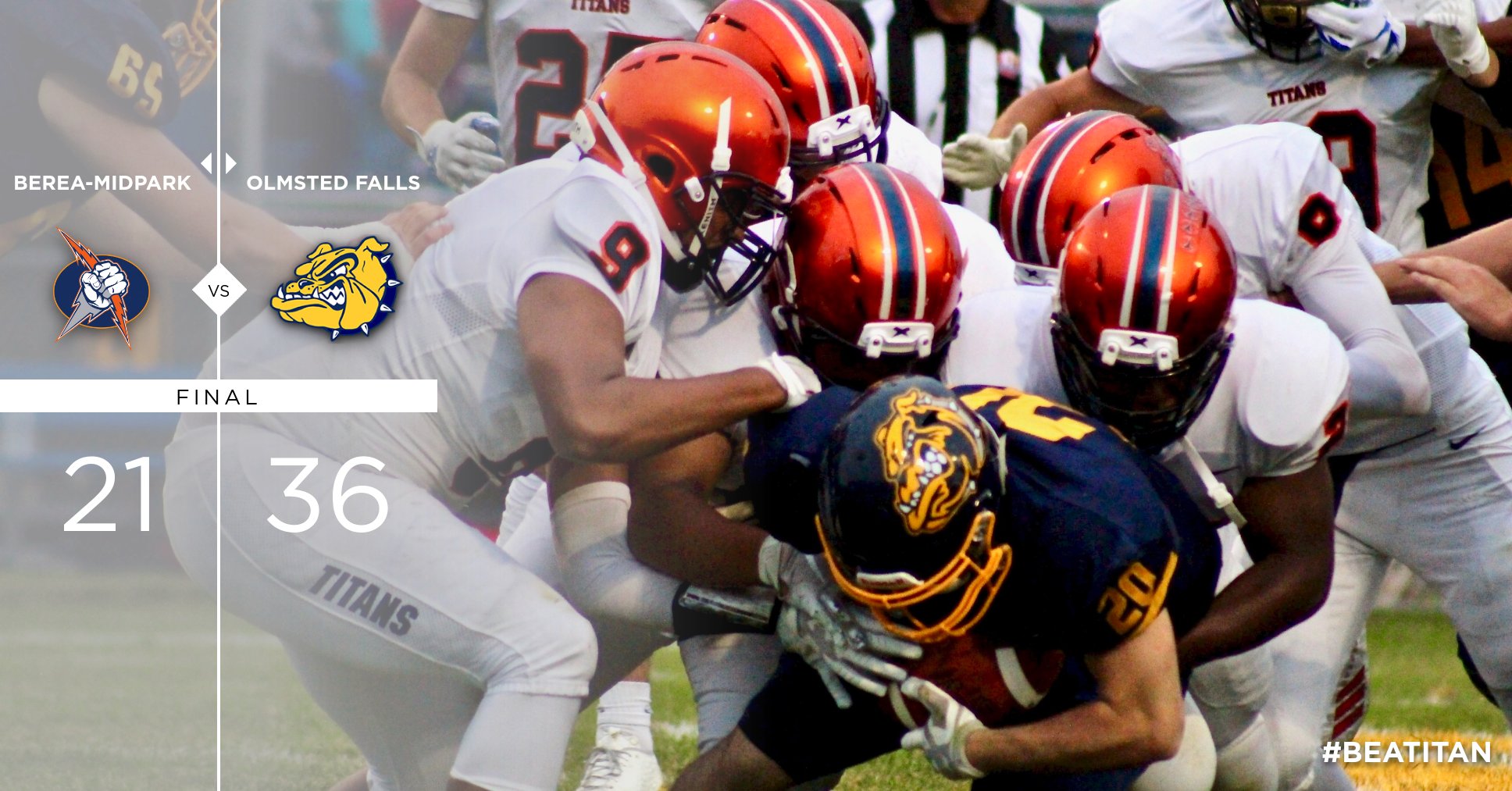 The Berea-Midpark football team fell to the Bulldogs of Olmsted Falls by a final score of 36-21 in a Southwestern Conference showdown Friday night.

The Titans (0-2, 0-1 SWC) were led by sophomore quarterback Luke Devins as he accounted for 224 of Berea-Midpark’s 269 total yards. Devins completed 19 of 26 passes for 191 yards and two touchdowns and carried the ball eight times for 33 yards. Sophomore wide receiver DeAngelo Borders led the receiving corps with 48 yards on fives catches with a 42-yard touchdown.

Olmsted Falls (2-0, 1-0 SWC) kept the ball on the ground, grinding there way to 298 yards of rushing offense on the night. Junior Connor Reynolds led the Titans defense with 5.5 tackles, while Jon Lyons and Cameron Siggers each had 5 tackles, Siggers with two in the backfield.

Berea-Midpark jumped out to an early lead on its opening drive when Borders broke a tackle and scampered 42 yards down the right sideline to pay dirt. Olmsted Falls would answer in the first quarter with touchdown runs by Brennan Stang and Devontae Boyd to take the 14-7 lead at the quarter break.

Jon Lyons was on the receiving end of Devins’ second touchdown pass of the game to tie the score at 14 a piece. Berea-Midpark would score again when senior Chase Ivancic filled in on a play with Devins on the sidelined with a knee brace malfunction. The senior back up quarterback read the defensive end and pulled the ball out of the belly of his running back and dashed to the right for 22 yards and the go-ahead score. Boyd would score his second rushing touchdown of the night with seconds remaining on the clock to tie the game before halftime.

The Bulldogs would tack on two more rushing touchdowns in the second half and expertly controlled the clock with their ground game to seal the victory.

UP NEXT
Berea-Midpark returns to action on Friday, September 13 when it returns home to face Avon Lake in an SWC clash inside George Finnie Stadium at 7:00 p.m.