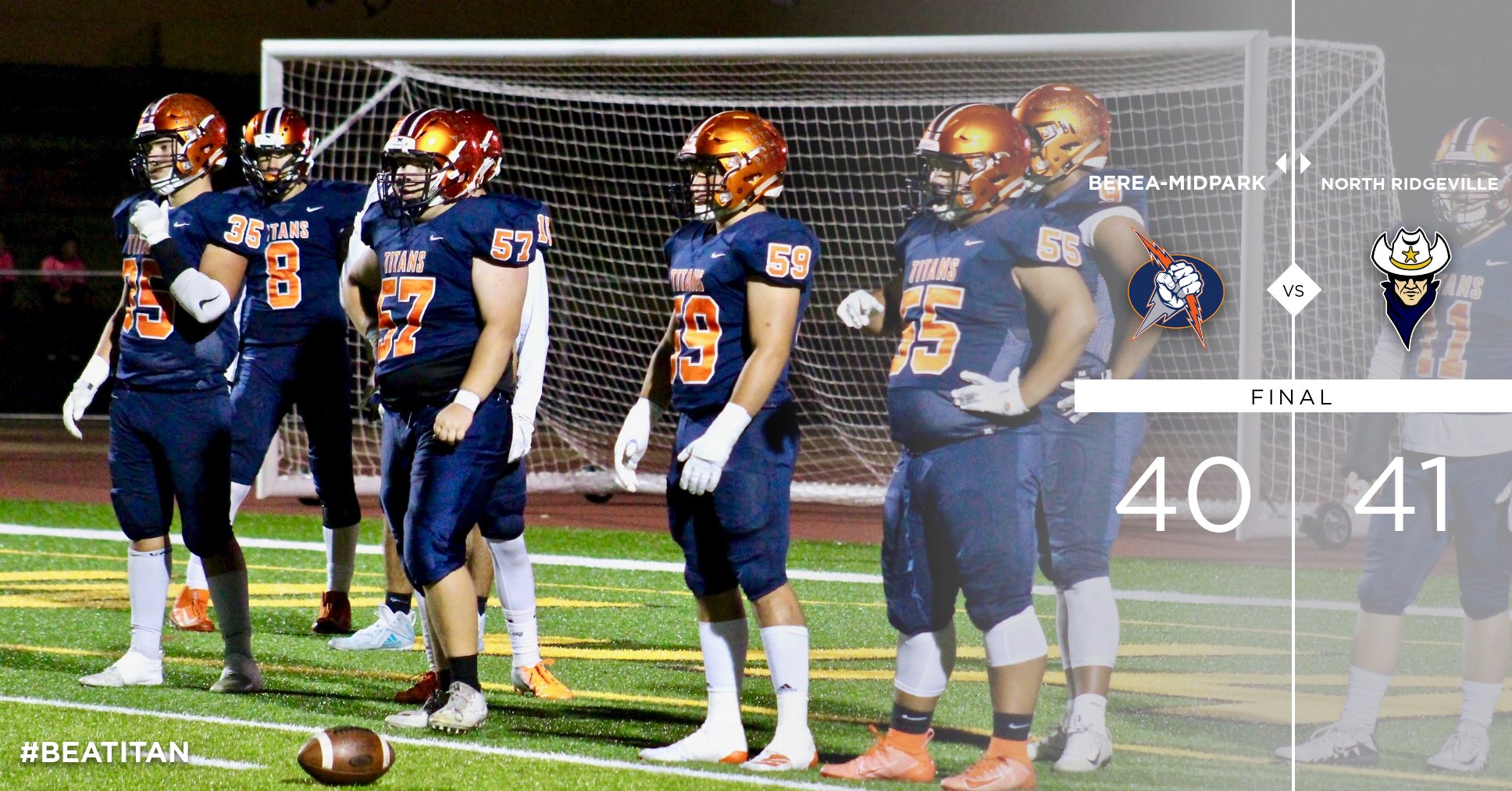 Senior running back Jon Lyons had 157 total yards of offense and found the endzone five times, but the Berea-Midpark football team lost 41-40 in overtime in a Southwestern Conference showdown with North Ridgeville in George Finnie Stadium.

Lyons ran for 74 yards in 16 attempts and four TDs. The senior captain also caught a team-high six passes for 83 yards and the tying score that forced the game to overtime. The Orange and Blue defense was led by junior linebacker Connor Reynolds who had a game-high 9 tackles.

It was the ground game that kept North Ridgeville in the game. Senior quarterback Tyler Richmond captained the spread option game to perfection for the Rangers, who had 339 yards of offense on the ground. Richmond ran for 162 yards and two scores and also recorded a touchdown through the air. Senior running back Shane Swindig had 18 carries for 139 yards, finding the endzone twice for the Rangers.

Despite four turnovers, the Titans found themselves with an opportunity late to extend the game. Senior safety Chase Ivancic intercepted a Richmond pass with 33 seconds remaining in the fourth quarter. Devins took the team 75 yards down the field, going four for six on the drive, including a 32 yard desperation heave into the endzone as time expired that was caught by Lyons and the extra point converted by Joe Matese forced that forced overtime.

In overtime, the Titans needed only four plays to find the endzone and take the lead. Lyons again converted, this time following the blocks of Cooper Roff, Hunter Bonham and Romel Kent up the ride side to paydirt. Matese again would convert the point after giving Berea-Midpark a seven point lead.

Dominic Farago would find the endzone on North Ridgeville’s third play in the overtime period on a sweep to the left. Head Coach Luke Durbin opted to go for two and the win. Richmond found the sophomore running back Farago again through the air for the two point conversion and the game winner.

UP NEXT
The Titans will travel to Amherst October 11th to battle the Comets. Kickoff is set for 7 p.m.