The Berea-Midpark girls track & field team crowned two All-Ohioans on Saturday evening at the OHSAA Track and Field Championship held at Jesse Owens Memorial Stadium on the campus of The Ohio State University.

Faith Kingsley made her Jesse Owens debut as a freshman in the long jump event, coming into the state meet with the eighth best mark in Division 1 – 17-05.75.  Kingsley competed in the opening flight, posting her best mark on her first attempt – 17-04.25.  Patiently waiting through the second flight, Kingsley’s mark was good enough to advance to the finals.

Shura Ermakov returned to Columbus for the second time in the 300 meter hurdles over the weekend.  She entered the preliminary heats on Friday evening with the 10th fastest time in Division 1 with a mark of 44.77 seconds.  Running in the second heat of the preliminary round, Ermakov raced to a 44.78 time and into the finals.  The junior would shave 0.64 seconds off her preliminary time in the finals and finish seventh overall to earn All-Ohio honors with her time of 44.14.

Saturday afternoon kicked off with Justin Muchewicz in the pole vault.  With the opening height starting at 13 feet, the senior vaulter was clean through his first three heights.  Muchewicz would PR at 14 feet 6 inches on his second attempt and earn himself 10th place overall.

On Friday evening the girls 4×800 relay team of Morgan Jankowski, Megan Thai, Kenzie Howard and Ermakov would finish 18th overall with their time of 9:56.52. 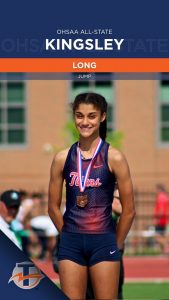 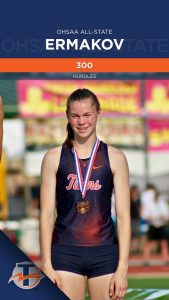